The story of the “Divine Émilie” & Voltaire

I am fascinated by women in history who were daring and unconventional. In 18th century France women were enormously restricted by class, position and convention. Gabrielle Émilie Le Tonnelier de Breteuil, Marquise du Châtelet (1706-1749) was a French mathematician, physicist, and author during the Age of Enlightenment. Her crowning academic achievement is considered to be her translation and commentary on Isaac Newton’s work Principia Mathematica, no less!

In 1733 Émilie invited Voltaire (1694-1778) the celebrated writer, historian, and philosopher to live in her country house at Cirey-sur-Blaise,  where they shared their passion not just for science… Voltaire became her long-time companion and lover, a story that is the subject of Nancy Mitford’s novel Voltaire in Love. 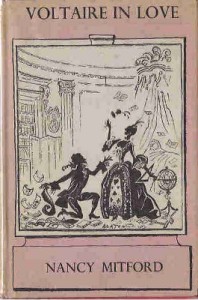 Voltaire wrote to a friend about Émilie: “Everything about her is noble, her countenance, her tastes, the style of her letters, her discourses, her politeness. … her conversation is agreeable and interesting.” Who would not like to be described like that?

In the frontispiece to to his 1738 Elements of the Philosophy of Newton, du Châtelet appears as Voltaire’s muse, reflecting Newton’s heavenly insights down to Voltaire. As a literary rather than scientific person, Voltaire implicitly acknowledged her contributions.

I have been lucky to have had men in my life who wrote poetry to me…there is nothing like it when you are in love. Voltaire wrote this poem about Émilie:

Here’s a portrait of my Émilie:

She’s both a beauty and a friend to me.

Her keen imagination is always in bloom.

Her noble mind brightens every room.

She’s possessed of charm and wit,

Though sometimes shows too much of it.

She has, I assure you, a genius rare.

With Horace and Newton, she can compare.

Yet, she will sit for hours and hours

With people who bore her

Men, get your pen and paper out!

One Comment to “Sex & Science in 18th Century France”