A room with view…

Night or Day, the Manhattan skyline never ceases to amaze.

I always consider New York “my” town. For as long as I remember, it is the place where I wanted to live and work. Alas, my destiny deviated me through France, but luckily New York is on the agenda several times a year.

So I feel quite the New Yorker. The skyline is a marvel at any time of the day or night, remember the opening shots of Woody Allen’s film “Manhatten” to the music of Gershwin’s “Rhapsody in Blue”?

Currently I am staying with my lovely friend Marilyn, whose views are as glamorous as she is, we overlook the East River and see the seaplane come in, the tug boats, the traffic on the 59 Street Bridge, the cable car to Roosevelt Island and the bend of Manhattan’s Lower East Side towards Brooklyn Bridge:

In the morning I sit on the windowsill and watch the contruction of the tallest apartment building in New York: 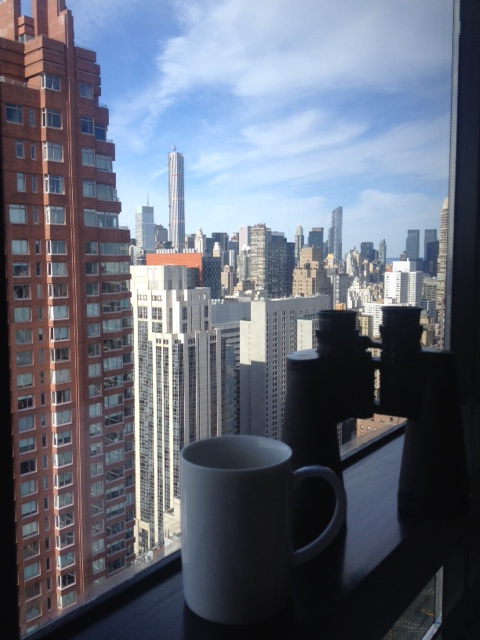 Coffee, binoculars and plenty to look at…

But my absolute favorite view is from her hallway due West. A skyline just like it would have been 50 years ago, with in the distant left the twin towers of the grand San Remo apartment building on Central Park West:

Uptown, downtown, East Side or West Side, it is like the great divide in Paris between “rive droite” and “rive gauche”. I crept my way around Manhatten over the years, following my friends who kindly offered me a welcome bed and hospitality.

I lived on 10th avenue between 17th and 18th street when it was still really the “Meatpacking” district with no Highline, trendy stores and hotels. I even lived in the (very grotty) Chelsea Hotel:

I lived high up the Upper West Side when a dear friend went to Columbia University, then I migrated down to the West Side just off Lincoln Center, New York’s magnificent Opera House. 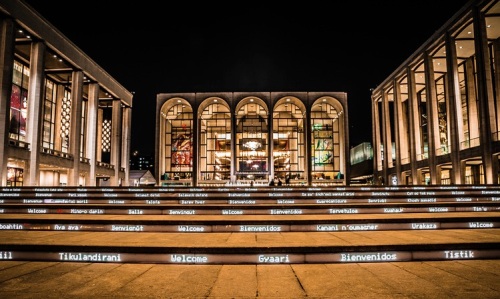 But now, I belong strictly to the Upper East side! And I fall asleep at night dreaming away to the backdrop of the mysterious twinkling lights of the “city that never sleeps”….

View of the East River at night.