On May 17, 1944, Rommel and Eisenhower are pursuing their own agenda’s:

Rommel is on his last inspection tour of the Normandy Coast and General Eisenhower sets the ultra secret original date for D-Day: June 5.

Field Marshall Rommel surrounded by his generals on the steps of Chateau Bernaville in Normandy – May 17, 1944

On the 17th of May, 1944, Rommel visited General Falley at the Chateau de Bernaville close to the future “Utah Beach” landing site, to review the defenses of Normandy in general and the Peninsula in particular. It must have been a cloudy, cold, overcast day, as Rommel (above) is shown with Falley on the steps in full overcoat. Many of the staff wore gloves and heavy dress uniforms.

That same day, in England, General Eisenhower decides on the date for D-day: June 5!

Rommel did a very thorough tour of the coast and its defenses, adding a lot of last minute improvements to stop or at least slow down a beach landing:

Rommel inspecting the German defences on the Normandy Coast – May 1944 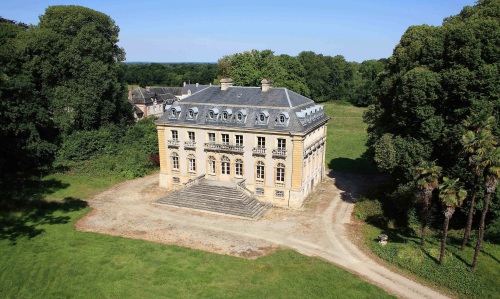